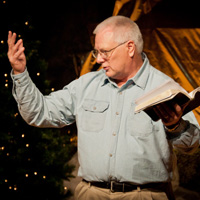 Pastor Al has been at Church of the Good Shepherd since July 2011 as the lead pastor.  He has served United Methodist Churches since 1977 of various sizes and stations in their growth and development.  The most recent appointments were to the Faith Alive United Methodist Church for 13 years in Bowmanstown, PA where he was involved with the merger of four churches and the building of a new facility, and Tabor United Methodist Church where he was involved in the church development and facility expansion for 12 years in Woxall, PA.  He has a passion for worship as well as encouraging the church to take its faith to the streets through the lives and ministries of its members.

Pastor Al has a Bachelor’s degree from East Stroudsburg State College (now University) in Sociology/Criminology and a Master of Divinity degree from Eastern Baptist Theological Seminary (now Palmer Seminary.)   He has served in the Eastern Pennsylvania Annual Conference of the United Methodist Church in a variety of capacities including chairing the Board of Ordained Ministry and as a representative from Eastern Pennsylvania to the Jurisdictional Conference of the denomination which covers the northeast area of the United States.

He is married to Mary (Hower) Smith and has five children.  He and Mary enjoy the outdoors – canoeing, hiking and camping as well as spending time with their grandchildren.

“7 But whatever things were gain to me, those things I have counted as loss for the sake of Christ. 8 More than that, I count all things to be loss in view of the surpassing value of knowing Christ Jesus my Lord, for whom I have suffered the loss of all things, and count them but rubbish so that I may gain Christ, 9 and may be found in Him, not having a righteousness of my own derived from the Law, but that which is through faith in Christ, the righteousness which comes from God on the basis of faith, 10 that I may know Him and the power of His resurrection and the fellowship of His sufferings, being conformed to His death ; 11 in order that I may attain to the resurrection from the dead.”